VA Form 21-0781, Statement in Support of Claim for Service Connection for PTSD, is an application form that should be filled out by every veteran filing a claim for service-related PTSD. The form is submitted to the Department of Veterans Affairs (VA) explaining and describing the traumatic circumstances surrounding an in-service incident that has lead to the current condition.

VA Form 21-0781a, Statement in Support of Claim for Service Connection for Post-Traumatic Stress Disorder (PTSD) Secondary to Personal Assault, is a similar form used by veterans whose diagnosis was determined to have been caused by a personal assault.

Both forms will ask the applicant to describe the event or events that caused the current condition along with the exact dates, time frames, and locations of the incident. Additional requested information includes your unit assignment and the dates of assignment along with the names and other details about the participants of the event.

Post-Traumatic Stress Disorder - or PTSD - is a medical condition that may occur when a person underwent a particularly traumatic event in their past or was subjected to the risk of injury or death to themselves or someone close to them. The common symptoms of PTSD include:

The disorder is most common among veterans and military personnel. If a veteran has a Purple Heart award, a Combat Infantryman Badge, or a Combat Action Ribbon an account of what happened during the incident does not need to be provided. The VA will concede that a stressful event happened when making a decision on the PTSD claim. All other cases required following a specific set of steps needed for establishing a direct service connection with PTSD. The required information includes: 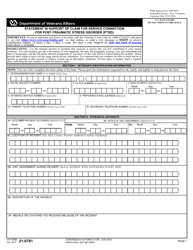 The form is filled out by every service member claiming for Post Traumatic Stress Disorder (PTSD) with the Department of Veterans Affairs (VA). The veterans are expected to document the events that led to the disorder during their duty. 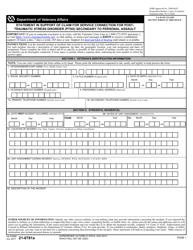 This is a form issued by the Department of Veterans Affairs (VA) and filed by veterans whose primary reason for PTSD was caused by a personal assault.