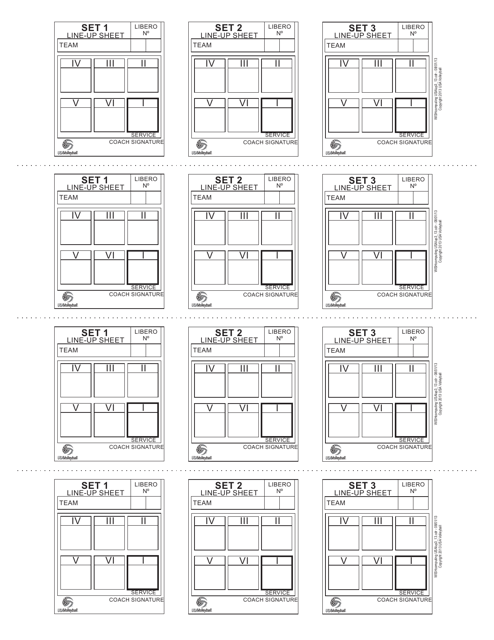 A Volleyball Line-Up is a list of players that will participate in a volleyball game. The traditional arrangement for six players includes one setter, one opposite hitter, two outside hitters, and two middle blockers. However, other variations are possible. The coach fills out a Volleyball Line-Up Sheet before every set. The line-up is used to document the players appointed to a specific game. It is a table containing fields for providing the name of the team, the liberos, and the players. The coach of the team completes the table indicating the serving order of the appointed players from I through VI. The players are marked by their jersey numbers.

The coach gives out the libero and indicates which player is the captain. The libero is always listed with the starting line-up, although is not considered a part of it. This player is a specialist in defensive tactics. The libero is used to replace one of the players, typically, in the back row. The floor captain is marked with a letter C. The letter is indicated next to the captain's number in the table. All line-up sheets for volleyball must contain the signature of the coach.

The USA-specific Volleyball Line-Up Sheet available for download below allows registering the players for a given game and listing their playing order.

How to Keep Score in Volleyball?

The coach submits a filled out and signed Volleyball Line-Up Sheets to the scorekeeper no later than two minutes before the end of the pre-match warm-up. The scorekeeper is the person responsible for tracking and recording score for the defined volleyball match. The equipment necessary for keeping scores includes two line-ups (required for filling out the scoresheet), one libero control sheet, two regular set scoresheets, one deciding set scoresheet, a visual scoreboard, a pen, a pencil, and an eraser. The scoresheet is used to record the scores and track the position of the players as the game progresses.

After the coin toss, the scorekeeper gives the line-up sheets to the second referee. Showing completed and signed documents to anyone but the officials is strictly forbidden. 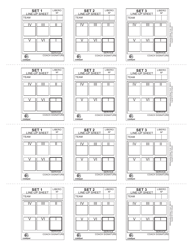