Form CMS-802 is a U.S. Department of Health and Human Services - Centers for Medicare and Medicaid Services form also known as the "Matrix For Providers". The latest edition of the form was released in January 1, 2018 and is available for digital filing.

Download a PDF version of the Form CMS-802 down below or find it on U.S. Department of Health and Human Services - Centers for Medicare and Medicaid Services Forms website. 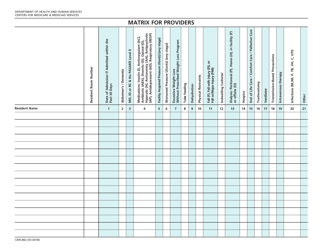