The DD 137 Forms are a set of documents that deal with establishing the relationship and dependency status of claimed dependent family members of service members to determine their entitlement to certain benefits provided by the U.S. Army.

The series is made up of four forms - DD Form 137-3, DD Form 137-5, DD Form 137-6, and DD Form 137-7. All forms were released by the Department of Defense (DoD). Up-to-date fillable versions of all DD 137 Forms are available for download and digital filling out through the links below or can be found on the Executive Services Directorate website.

Original supporting documents are not required when submitting the statements. Legible copies will do. A single form is required when applying both for Basic Allowance for Housing (BAH) entitlements and Uniformed Services Identification and Privileges card entitlements but all supporting paperwork must be attached for the application to be accepted.

All DD 137 Forms must be completely filled in with no blank spaces allowed on the statements. All forms with notary blocks must be signed and dated by a Notary Public. The completed dependency forms must be submitted to the Defense Finance and Accounting Services (DFAS) Secondary Dependency Claims module. 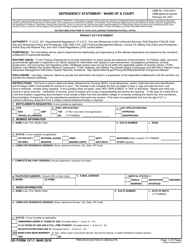 This is a form used for determining the relationship and dependency of claimed dependents and the member's entitlement to authorized benefits on behalf of a Ward of Court.