The IRS additionally provides specific instructions for filing Form 3520 and Form 3520-A.

IRS Form 3520, also known as the "IRS Foreign Trust Form", is a form filed with the IRS by United States persons (and also executors of estates of U.S. deceased) in order to report certain transactions made with foreign trusts; ownership of any portion of a foreign trust; and receipt of certain gifts or bequests from foreign individuals, partnerships, corporations, or estates.

More specifically, a Form 3520 reportable event may occur when: 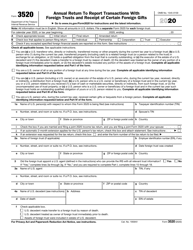 This form also goes under the name of the IRS Foreign Trust form. It is downloaded by persons from the United States (and also executors of estates of U.S. deceased) for reporting certain transactions with foreign trusts, including gifts and bequests from foreigners. 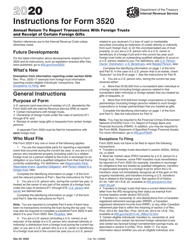 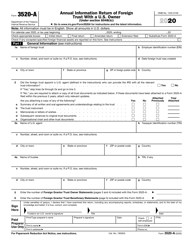 This document is submitted to the Internal Revenue Service (IRS) annually by foreign trusts with a U.S. owner to inform the IRS about the trust, its American beneficiaries, and any U.S. trust owner. 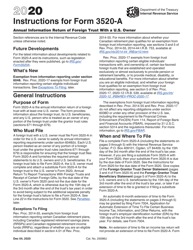 Instructions for IRS Form 3520-A "Annual Information Return of Foreign Trust With a U.S. Owner", 2020