What Is a Tooth Fairy Letter?

A Tooth Fairy Letter is a document that can be defined in different ways. They can include:

The most common Tooth Fairy Letter ideas described above are used by many parents and legal guardians around the world. It helps many children to overcome the potentially traumatic event by creating a magical atmosphere, as well as cheering up the child with pocket money they can spend on things they desire. Check out our library below to browse printable Tooth Fairy Letter samples.

How to Write a Letter to the Tooth Fairy?

Since a child's age that would like to write a letter can vary, a Tooth Fairy Letter template should be simple and include a few sections:

The structure of the letter is flexible and can be changed to make it easier for the child to write it by themselves. The note is supposed to let the children use their imagination in expressing their thoughts and describing what has happened to them.

How to Write a Letter From the Tooth Fairy?

If a parent or a legal guardian wants to write their child a letter from the Tooth Fairy but do not know how to do that, they should follow the structure presented below:

Still looking for a particular template? Take a look at the related templates below: 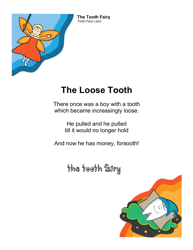 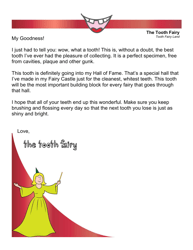 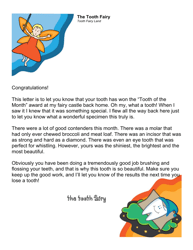 Sample "Tooth of the Month Award Letter From the Tooth Fairy" 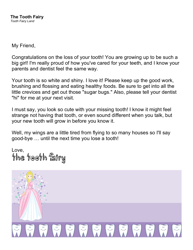