A Gift Aid Form is a type of document released by the United Kingdom HM Revenue & Customs that is supposed to be used when a charity wants to increase the contribution they receive by 25 pence for each incoming £1. The purpose of the document is to collect information about the contribution and the parties involved with it.

What Is a Charity Gift Aid Declaration?

The form is supposed to be completed and signed by the contributor and returned to the receiver of the donation. They must keep these documents for six years after they have claimed the gift aid. The contributor must be an individual and the receiver must be recognized as a charity organization or as a community amateur sports club (CASC) for tax purposes.

There are two types of Gift Aid Forms. Despite the fact that their contents are quite similar they are supposed to be used in different situations. The choice of which document to use will depend on whether the giving party would like to Gift Aid one contribution or several of them.

How to Fill in a Gift Aid Form?

A Charity Gift Aid Declaration is presented in a form of a letter where the contributor is supposed to fill in several gaps and check applicable boxes. Its content can be vaguely divided into a few parts, namely:

Not what you need? Check out these related forms: 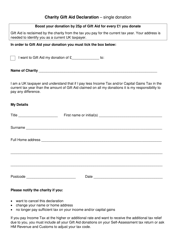 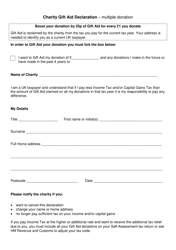