VA Form 4107 series outline the appeal process, in case a veteran disagrees with the Department of Veterans Affairs (VA) decision to grant some, all, or none of the VA benefits the veteran has asked for. The VA Decision Appeal form defines the necessary steps to begin the process of appeal.

There are five forms describing the appeal process:

The latest version of the VA 4107 Form was released by the VA in June 2016 with all previous editions obsolete. A printable VA Form 4107 fillable version is available for download and can be found through the VA website. VA Form 4107 also advises veterans to consult with the complete Code of Federal Regulations online on their website.

Your Rights to Appeal Your Decision

According to the VA Appeal Form, a Notice of Disagreement must be submitted to begin the appeal process. It must be sent to the address included on the decision notice letter, and its status can be checked online. A veteran has one year to start an appeal of the VA's decision. This deadline cannot be missed: otherwise, the decision becomes final. Once it is final, a veteran cannot get the VA benefit, unless there is a possibility to show the VA that they were clearly wrong to deny it, or a chance to send them new evidence to prove the case. After the VA receives a Notice of Disagreement, they either grant the claim or sent a Statement of the Case – a document outlining the facts, reasons, laws, and regulations they used to make a decision. A veteran will also receive a VA Form 9, Appeal to Board of Veterans’ Appeals, which can be completed and returned. That way, a veteran gets a chance to be heard before a Board of Veterans’ Appeals. Form 4107 VA recommends to send more evidence to support a claim – it can be submitted in writing to the address included in the decision notice letter or brought up during a personal hearing.

How Long Does a VA Appeal Decision Take?

Usually, the VA takes 12-18 months to review veterans' appeals. When a veteran requests a review from a Veterans Law Judge at the Board of Veterans' Appeals, it extends the processing period up to 5-7 years to get a decision. This is a challenging and elaborate procedure; however, a veteran can have a Veterans Service Organization (VSO) representative, an «agent», or an attorney-at-law to help with the appeal. Representatives from the VSO possess knowledge and experience in veterans’ law and are licensed to practice in the United States and/or its territories. 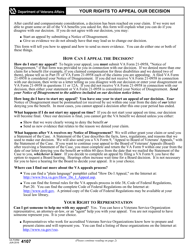 VA Form 4107 "Your Rights to Appeal Our Decision"

This document explains how to start an appeal with the aid of a Notice of Disagreement. If the Department of Veterans Affairs (VA) was not able to grant some or all of the VA benefits, a veteran, a Veterans Service Organization representative, an attorney-in-law, or an «agent» can begin an appeal process. 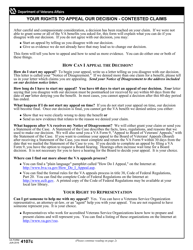 This document describes an appeal process on a contested claim. A contested claim exists when two persons file a claim for the same benefit and/or allege to be a veteran's surviving spouse or parent. 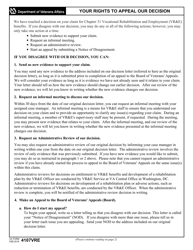 VA Form 4107VRE "Your Rights to Appeal Our Decision"

This document provides an overview of the appeal process on claims for Chapter 31 Vocational Rehabilitation and Employment (VR&E) benefits. 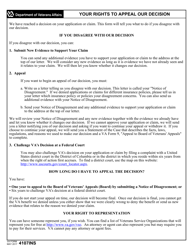 VA Form 4107INS "Your Rights to Appeal Our Decision"

Use this document if you are a veteran and wish to appeal the Department of Veterans Affairs (VA) decision to deny an insurance claim. 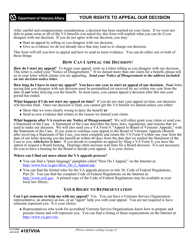 VA Form 4107VHA "Your Rights to Appeal Our Decision"

This document describes how to appeal decisions made by the Veterans Health Administration (VHA). It covers health benefit (medical) appeals, which include outpatient treatment, eligibility for hospitalization, nursing home, and domiciliary care.