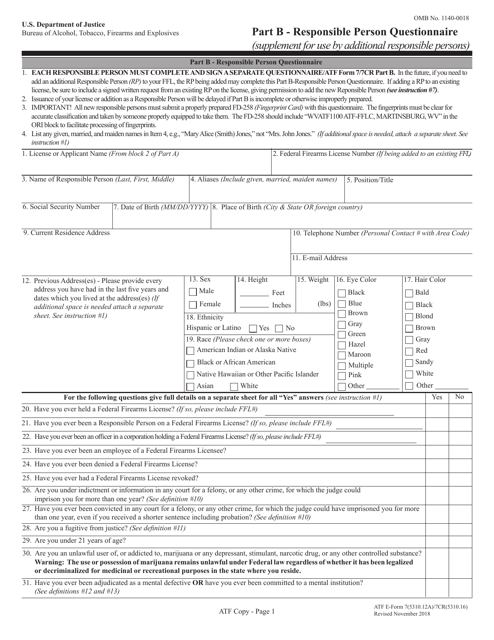 ATF Form 7/ATF Form 7CR Part B, Responsible Person Questionnaire (Supplement for Use by Additional Responsible Persons) is a form issued by the Bureau of Alcohol, Tobacco, Firearms, and Explosives (ATF) as a supplement to the ATF Form 7/ATF Form 7CR, a form submitted by applicants who intend to engage in the firearms business and need to request a Federal Firearms License (FFL). The form has two additional numbers (ATF Form 5310.12A/ATF Form 5310.16)

The form was last released in November 2018 and allows applicants to add Responsible Persons (RPs) to be added to their FFL Application. A fillable ATF Form 7 Part B is available for download below.

All responsible persons shall complete and sign a separate questionnaire. An RP is defined as either the Sole Proprietor or any individual possessing the power to direct the management, policies, and practices of the Corporation, Partnership, or Association, to the extent that they pertain to firearms.

Each RP must submit a properly prepared fingerprint card (Form FD-258), except if they have previously submitted one for another FFL. It is required that fingerprints be clear for accurate classification and be taken by someone experienced in the matter. To expedite the processing of fingerprints, "WVATF1100 ATF-FFLC, MARTINSBURG, WV" should be listed in the FD-258 Originating Agency Identifier (ORI) block.

Each RP should attach a 2 inch by 2-inch photograph taken within the last six months to the back of the ATF Form 7 Part B. It is very important that each photograph is clearly identified on the reverse with the complete name of the RP. If you are only applying for a Type 03 (Collector of Curios and Relics) license, a photograph and fingerprint card are not required.

Please be aware that, when adding an RP to an existing license, a signed written request from a current RP on the license, giving the authorization to add the new RP, must be annexed to each questionnaire.

In order to effectively add an RP to an existing license, Part B must be mailed to the ATF (Attn: FFLC, 244 Needy Rd, Martinsburg, WV 25405) together with the fingerprint card, the photograph, and the authorization. If you are not just adding an RP to an existing license, but applying to obtain a new FFL, send a separate questionnaire, photograph, and fingerprints card for each RP plus the FFL Application and the application fees to the following address: Federal Firearms Licensing Center, P.O. BOX 6200-20 PORTLAND, OR 97228-6200.

How to Fill out ATF Form 7 Part B?

In order to complete the form, type or print with a ball-point pen. If you attach any sheets to your form, identify them with your name and Employer ID or Social Security Number, and refer to the item number you are replying to: 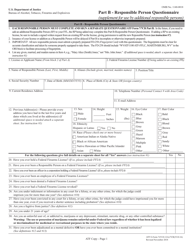 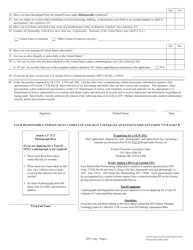 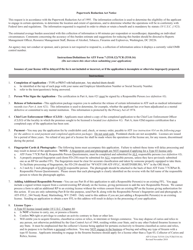 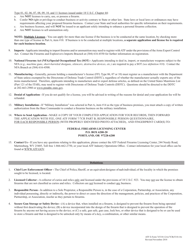 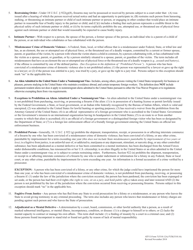 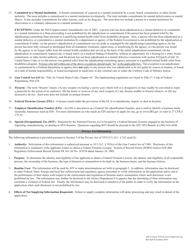