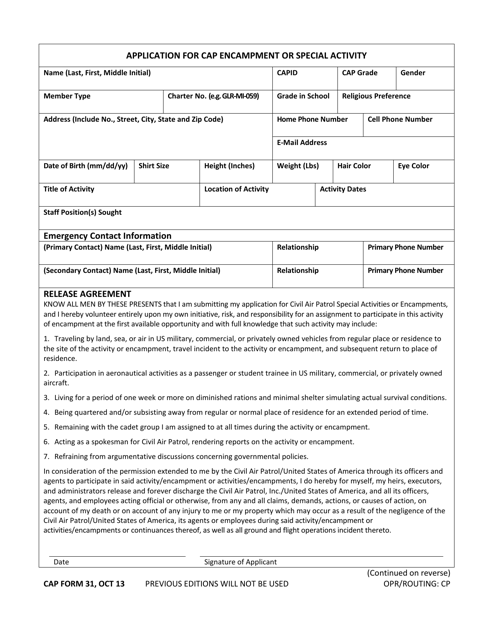 Form CAPF 31, Application for CAP Encampment or Special Activity, is an official form signed by cadets and their parents or guardians to apply for cadet programs - National Cadet Special Activities (NCSA) or encampments. The written release of a parent or guardian is obtained for every cadet who wishes to participate in a wide range of Civil Air Patrol (CAP) cadet activities, including encampment, orientation flights, leadership symposiums, cadet honor academy, marksmanship, and first aid training.

This form was released on , with all previous editions obsolete. A CAPF 31 fillable form is available for download through the link below.

NCSAs and encampments are designed to offer CAP cadets experience with diverse aspects of the CAP program and provide substantial insight into aviation-related careers. In accordance with CAPF 31 requirements, you need to announce the activity in advance and obtain the authorization prior to the event. Since cadets are minors, their parents' or guardians' permission to participate in the activity is vital along with the applicant's acknowledgment of possible harmful consequences that may occur as a result of the negligence of the CAP or its employees.

A CAPF 31 Form consists of two parts - the first page of the form contains personal information about the cadet, the upper part of the second page allows individuals responsible for the cadet to grant their permission to participate in specific activities or encampments, and the lower part of the second page is reserved for the signatures of commanders responsible for the activities.

The applicant signature on Form CAPF 31 signifies their intent to participate in the above-specified activity and their acknowledgment of the possibility of the following events:

The form is signed by a parent or legal guardian if the cadet-applicant is underage. Their signature confirms that the following statements are true and accurate:

The form requires the signatures of both parents or two legal guardians of the cadet, along with two witnesses who also sign the document. The second page of the form may be signed and dated by the squadron commander, group commander, or wing commander. However, their signatures are not mandatory if the activity is approved online or it is an activity within the unit. 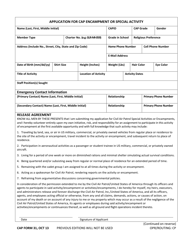 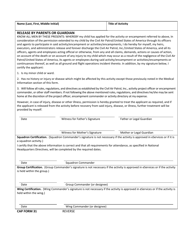