The DD 2656 Form series is a set of nine forms related to the election, verification, and termination of the Survivor Benefit Plan.

The Survivor Benefit Plan - called the SBP for short - is a life insurance policy initiated by the Department of Defense (DoD) that provides monthly payments to eligible surviving spouses and dependent children of retired service members upon their death. The SBP, Reserve Component Survivor Benefit Plan (RCSBP) and Retired Serviceman's Family Protection Plan (RSFPP) provide elected beneficiaries with a monthly payment (or an annuity) for the rest of their life. The amount of the payment is a percentage of a service member’s retired pay based on their election.

Election to participate in any of these programs is made at the time of retirement. There are certain participation costs. In most cases, these are deducted from the retiree's monthly pay and vary depending on the number of elected benefits.

The DD Form 2656 (Data for Payment of Retired Personnel) provides relevant information needed to establish a retainer or retired pay account and information on dependents. The form is used to designate beneficiaries for unpaid retired pay, state tax withholding election or establishing an SBP election.

The DD Form 2656-1 (SBP Election Statement for Former Spouse Coverage) is a form used by spouses and former spouses of service members for purposes of providing information regarding SBP benefits. The completed forms are mailed to the Defense Finance and Accounting Service (DFAS) in Indianapolis, Indiana along with an official copy of the divorce decree, amendment and any other applicable documentation described in the form. The election is considered invalid if not mailed to and received by the DFAS within a year after the date of the divorce.

The DD Form 2656-2 is the SBP Termination Request. The form is used to voluntarily discontinue participation in the SBP. There are both advantages and disadvantages to discontinuing SBP participation. Benefits include tax advantages, government-subsidized SBP costs, protection against inflation and resumed coverage in cases when the service member chooses to remarry. The disadvantages are mostly personal or cost-related. SBP termination is valid only if the spouse's or former spouse's concurrence is witnessed by a Notary Public or a designated SBP Counsellor.

The DD Form 2656-5 or the RCSBP Election Certificate is used by Reserve Component Members to make an election for the RCSBP during the 90-day period after receiving notification of eligibility to claim Reserve retired pay.

The DD Form 2656-6 (SBP Election Change Certificate) is used by a retired army member to change a current SBP election. The completed form and the appropriate documentation are submitted to the DFAS in Kentucky for Army, Navy, Air Force and Marine Corps accounts or the U.S. Public Health Service/Commissioned Corps in Maryland for Public Health Service accounts.

The DD Form 2656-7 (Verification for Survivor Annuity) is used by the surviving spouse, former spouse or dependent children to verify eligibility for an annuity under the SBP, RSFPP or RCSBP.

The DD Form 2656-8 - SBP Automatic Coverage Fact Sheet - is used to determine army members' marital and dependency status in order to establish and maintain an accurate accounting of the retired pay account.  DD Form 2656-8 is not meant for electing SBP. It's used to obtain information about family members that are eligible to become beneficiaries under the SBP.

The DD Form 2656-10 (SBP/RCSBP Request for Deemed Election) is used by former spouses to provide information related to SBP coverage. The election is mailed via certified or registered mail to the appropriate Uniformed Service designated agent.

The DD Form 2656-11 (Statement Certifying Number of Months of SBP Premiums Paid) is used if the service member disagrees with the number of months credited toward Paid-up SBP by the DFAS. The completed form is then sent to the DFAS at London, Kentucky for review. 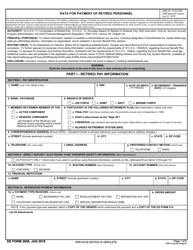 This form provides relevant information needed to establish a retainer or retired pay account and gathers information on any dependents the retiree may have. 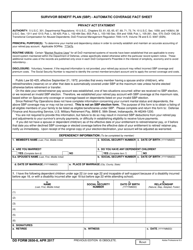 This form is used to determine a service member's marital and dependency status in order to establish and maintain an accurate accounting of the retired pay account. 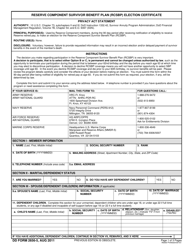 Download this form if you are a Reserve Component member and wish to make an election for the Reserve Component Survivor Benefit Plan (SBP) during the 90-day period after receiving notification of eligibility to claim Reserve retired pay. 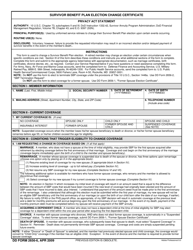 Use this form if you are a Retired service member and wish to change a Survivor Benefit Plan (SBP) election. You may elect a new insurable interest beneficiary within 180 days of the death of the previous beneficiary. 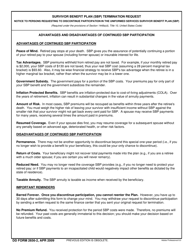 This is a form used to voluntarily discontinue participation in the U.S. Army Survivor Benefit Plan (SBP). 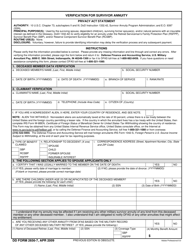 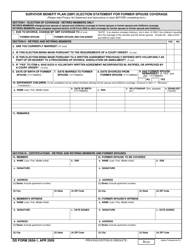 Use this form to establish a Survivor Benefit Plan election for the eligible former spouse of a service member. 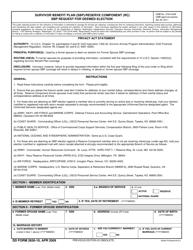 Use this form is you are a former spouse and wish to provide information related to Survivor Benefit Plan (SBP) coverage or Reserve Component SBP coverage. 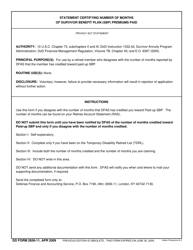 This form is for use by a retired member who disagrees with the number of months reported by Defense Finance and Accounting Service (DFAS) that the member has credited toward paid-up Survivor Benefit Plan (SBP).