The IRS 945 Form series is a set of three forms issued by the Internal Revenue Service (IRS). The forms are used by employers to report taxes withheld from certain payments and tax liability for semiweekly and monthly depositors.

If any of the forms are filed late, the IRS imposes a penalty up to 25% of the amount of unpaid tax, 5% for each month the form is late. If the employer receives the notice from the IRS about the imposed penalty, they should reply with a detailed explanation, why the form was filed late and if the IRS considers it reasonable, the penalty can be avoided. Also, if the IRS receives the form late, but the envelope with the form is postmarked by the U.S. Postal Service on or before the due date and deposits are made on time, the form will be treated as filed on time. 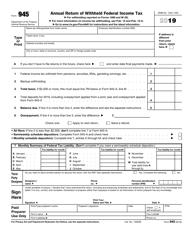 Use this document, also known as the Annual Return of Withheld Federal Income Tax to inform the IRS of the so-called nonpayroll payments (taxes that are withheld from pensions, gambling winnings, backup tax withholding, military retirement and so on). 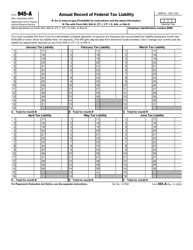 This form is also known among the taxpayers as Annual Record of Federal Tax Liability. Use it to report tax liability for the following forms: IRS Form 945, 945-X, CT-1, CT-1 X, 944 and 944-X. File this document by semi-weekly depositors and monthly depositors if you accumulated tax liability more than $100,000. 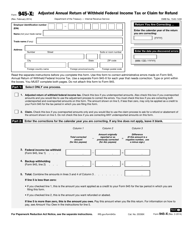 Download this document, otherwise known as the Adjusted Annual Return of Withheld Federal Income Tax or Claim for Refund to correct administrative errors on IRS Form 945 you filed earlier. An administrative error is defined as an error that has occurred when the reported amount of the withheld income tax is different from the actual amount. 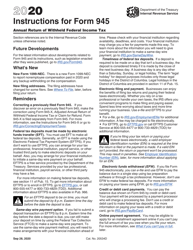