An Unconditional Waiver and Release is a legal document that is used by one party (generally called a claimant) when they want to waive their rights in return for payment they have collected from another party. Generally, the document contains a description of rights that the releasing party agrees to surrender and it can include a lien, payment notice, etc.

Looking for Unconditional Waiver and Release forms? Download them from our library below:

Usually, Unconditional Waiver and Release Forms are used in construction projects, however, they can be applied in other business areas as well depending on the specifics of the situation. The form can be applied to the situation when the releasing party obtains payment for the work they have delivered (or a part of the work they have rendered) and waives their right to file the claim.

In both cases, the document should be signed after the releasing party has obtained their payment, regardless of whether it is a final payment or a progress payment since the document is proof that the payment has been accepted and it can be used against the party.

Not the form you were looking for? Check out these related topics: 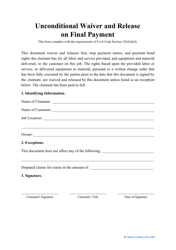 This document is signed when an individual has confirmed their intention not to pursue any legal action against the payer who has made a final payment towards their original contract. 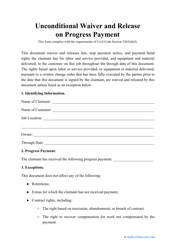 This document is prepared by one party and presented to another party with the promise not to pursue any legal action if provided with compensation for services already rendered.