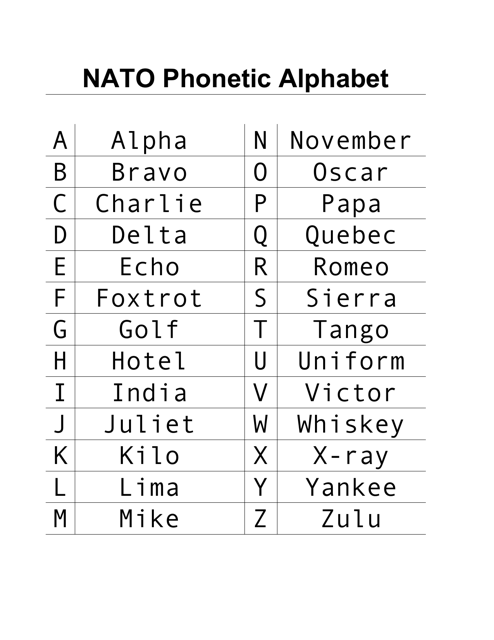 What Is the NATO Phonetic Alphabet?

The NATO Phonetic Alphabet is an alphabet developed by the International Civil Aviation Organization (ICAO) and used for the sending of voice messages. The purpose of the alphabet is to help individuals avoid any spelling mistakes or misunderstandings during radio or telephone communications. It also helps make the voice messaging more clear since most of the time it can be accompanied by static, different types of interference, and other noises.

After the alphabet was developed in 1956, it was adopted for use by many organizations, such as the International Maritime Organization, Federal Aviation Administration, International Telecommunication Union, American Radio Relay League, etc. Some of them adopted the NATO Phonetic Alphabet without any changes, while others have slightly modified it for their convenience.

Due to the fact that the previous alphabet system had faults and caused a lot of confusion during military conflicts, the ICAO has conducted research that resulted in the creation of the NATO Phonetic Alphabet. The ability to communicate clearly is especially important in dangerous situations, when people from different countries and with different accents work together.

A Military Alphabet PDF can be downloaded below.

How to Use the NATO Phonetic Alphabet?

The alphabet is used for transmitting voice messages. Its primary goal is to make communication clear and understandable in various situations, that's why it is constructed in such a unique way. NATO Phonetic Alphabet code words present each letter of the English alphabet and include:

The alphabet is mostly used for certain parts of messages that contain letters and numbers or abbreviations. It can be explained by the fact that some letters sound similar and in order to avoid confusion, in speech they are replaced with words. For example, in aviation, if the individual would like to transmit a message where they identify the plane as KLM, they would call it in accordance with the table above, "Kilo Lima Mike."

The NATO Phonetic Alphabet is used by military, police, as well as emergency and armed forces. In addition to this, sometimes it can be used in the civilian industry. For example, it is used in retail and IT spheres when they exchange details over the phone or refer to certain codes. The significance of this alphabet is hard to underestimate due to the wide range of uses.

Still looking for a particular form? Take a look at these similar templates: 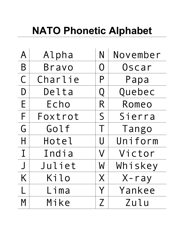