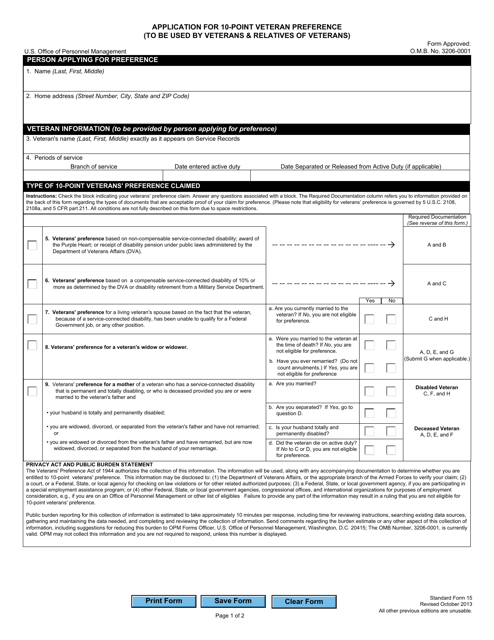 Form SF-15, Application for 10-point Veteran Preference, is a legal document needed to claim a 10-point veteran preference. Then, the U.S. Office of Personnel Management (OPM) determines if the applicant meets the requirements to receive this preference. This is a document for veterans (military retirees and individuals who have been honorably or generally discharged) and relatives of these veterans only.

This form was released by the OPM and the latest version of the form was issued in October 2013 with all previous editions obsolete. You can download a free fillable SF-15 through the link below.

Veterans may have an edge in getting a civil service job using the preference points and veteran's recruitment appointment rule.

This preference applies to hiring from civil service examinations. First of all, to claim the preference, you must be a veteran who has served and was discharged or released from active duty in the armed forces under honorable conditions. Ten points are added to the passing examination score of any eligible individual:

The SF-15 Form is used to apply for this preference along with the supporting documentation.

Form SF-15 instructions are as follows:

You may attach the following documents to the SF-15 Application for 10-point Veteran Preference:

Certain disabled veterans, veterans who have served on active duty, and their closest relatives are entitled to preference over non-veterans in hiring from competitive lists. Note that the entitlement to veterans' preference does not guarantee you a job but SF-15 can give you an advantage in the hiring process. Submit Standard Form 15 to the agency where you are applying for federal employment along with the supporting documentation and job application. 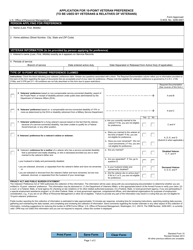 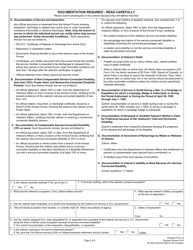