The DA 137 Forms is an out-processing forms packet released by the U.S. Department of the Army (DA) and used with Permanent Change of Station (PCS) readiness paperwork or pre-separation clearance verification paperwork.

Fillable versions of the DA 137 Forms are available for download below. The series consists of two forms in total:

Both of these forms need to be dated and signed by authorized personnel before the Soldier can receive clearance for PCS or separation.

The packet - sometimes confused with the DD Form 137 Series - is designed to assist the Soldier and their installation in completing their final clearance. Soldiers are responsible for ensuring that both forms are completed properly. Failure to correctly complete DA Form 137-1 and DA Form 137-2 will result in the Soldier receiving only 55% of their final pay. No final military pay appointments or separation payments will be released until both out-processing forms are received and approved.

This is a form used to ensure a service member's readiness for a Permanent Change of Station (PCS), as well as for completing clearance verification before transitioning from active duty, transferring to another service or component, separation, discharge or retirement. 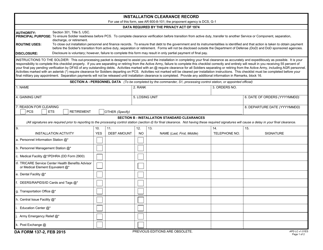 This is a form used during preparation for a Permanent Change of Station (PCS) in order to close out installation personnel and finance records.