The United States Army - formerly called the U.S. Department of the Army (DA) - is a federal governmental body in the U.S. that manages the process of organizing and training army forces. Due to its main functions, the department maintains a wide range of different forms that are supposed to make the procedure of preparing forces easier.

United States Army Forms and other Army publications are essential in accessing Active Duty and Veterans' benefits, special tax considerations, home loans, and discounts U.S. service members and Veterans may be eligible for.

The Army Publishing Directorate is the official online database of the U.S. Army Publishing Agency (USAPA) that hosts the information on the latest army forms and publications available to date.

Printable and fillable PDF versions of most U.S. Army DA Forms are available for download via our online DA Forms library. Browse by form number or title to access up-to-date printables along with step-by-step filing instructions and tips on accessing military benefits.

The U.S. Army provides a system of printable documents that can be used in various situations. Some forms are supposed to be submitted on a regular basis (monthly or annually), while others can be filed only when service members are required to do so by military officials. These forms can be used to obtain information about individuals that would like to join the armed force or have already joined them, to score and track their physic, to award them for their acts, and for other reasons.

Browse the links below to access printable U.S. Army Forms issued by the various subdivisions, offices, and agencies within the U.S. Military.

Subdivisions of the United States Army

Check in regularly for updates and new forms being added to our ever-growing library of U.S. Army publications. Click on the links below to download forms sorted by the offices and subdivisions of the U.S. Army.

The United States military is stationed in over 150 countries around the globe, with more than 160,000 of its active-duty service members deployed outside of the United States and its territories.

The United States maintains a worldwide network of military installations (also referred to as military bases or forts) and is the largest global operator of military facilities.

You can contact the U.S. Army directly through their official feedback form by providing your personal contact information and a topic of inquiry. Most general military questions can be found on the Department of Defense Frequently Asked Questions page. The headquarters of the U.S. Army is located at 1500 Defense Pentagon Washington, DC 20310. Call the Army toll-free hotline at 1-800-872-2769.

Not what you were looking for? Check out these related tags: 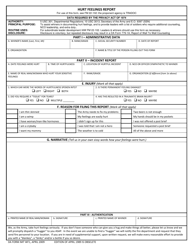 This is a form issued by the Department of the Army released to commemorate April Fool's Day in 1989.

Download this form to schedule and track work schedules for service members at all levels. 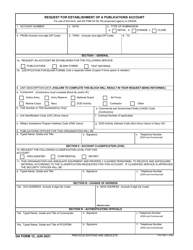 DA Form 12 "Request for Establishment of a Publications Account"

This form is used for requesting an Army publication account number or changing it in order to request a publication and/or blank forms through the Army ordering system. 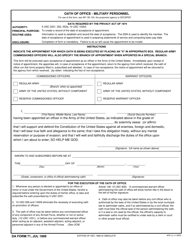 Use this form if you are a newly-appointed officer in order to create a record of the date of acceptance of appointment. 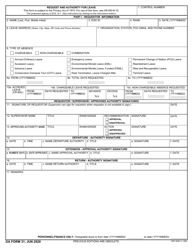 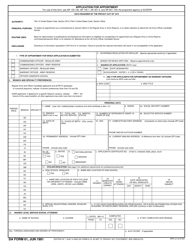 The purpose of this form is to obtain appointment in the position of warrant officer in the Army Reserve or the Army. It may also be used to possibly obtain a selection to attend the U.S Army Officer Candidate School.

This is a certificate given to service members after they have successfully completed certain Army training. These certificates are maintained in the Digital Training Management System (DTMS). 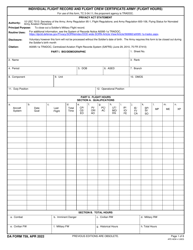 This form is used to close out flight records and is required for individuals on flight status. The form is generated by Centralized Aviation Flight Records System (CAFRS) for each soldier on flying status when closing records. 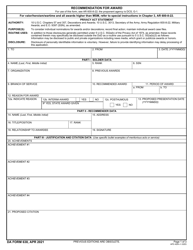 This document is used to recommend a soldier for most awards, except wartime awards, awards for valor and heroism. 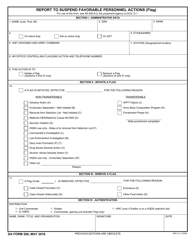 This form is used for adding or removing flags from a service member's record. A flag is an administrative measure implemented during disciplinary and administrative investigations within the U.S. Army. 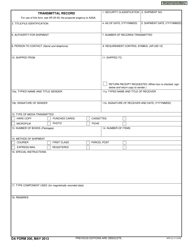 This form is used by the U.S. Army in order to keep track of transmittal records of Army property shipped from a receiving party to a shipping party. The form is filled out by the shipper. 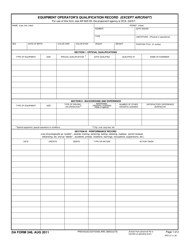 Download this form if you wish to determine the equipment operating qualifications and driving experience of a service member. 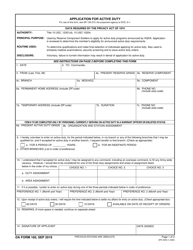 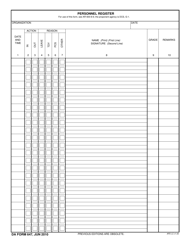 This is a source document for the Electronic Military Personnel Office (eMILPO), which is used for documenting personnel movements within units when performing a permanent change of the station (PCS) or carrying out temporary duty.

This form is used to score, track and calculate the results of the Army Physical Fitness Tests to see if the service member passed the requirements. 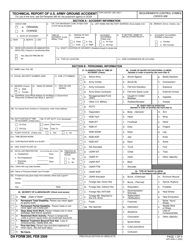 This form is used by supervisors to report any accident that happened on U.S. Army grounds and resulted in a serious injury, death or damage to property and equipment. 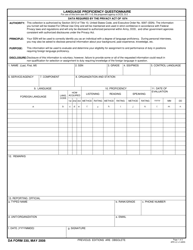 This is an official form that records the results of foreign language proficiency tests undergone by U.S. Army personnel.

This is a version of a service member's individual record brief used for recording assignment and family data and information about service and training. 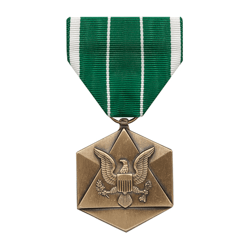 This is an award given to civilian employees within the U.S. Army for outstanding performance and excellence. 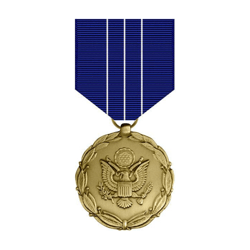 This is a medal granted to civilian employees within the federal agencies of the U.S. Government for superior service or outstanding achievement, as well as for heroism of a lesser degree. 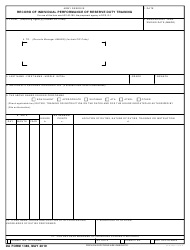 This is a form required for all dental and medical-readiness period payments to reservists assigned to U.S. Army Reserve (USAR) units. 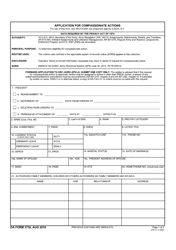 Download this form to request a compassionate action if a service member has extreme family problems. This may be a reassignment, detention, a deferment or a permissive attachment based on the specific circumstances. 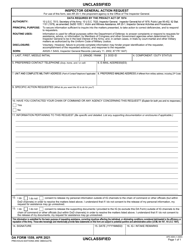 This form is used by Inspectors general, Department of Defense civilian employees and Soldiers for presenting complaints, grievances or requests for assistance, advice, or information.

This form is used for recording parachute jumps performed by U.S. Army soldiers. The results recorded on the form are used to determine eligibility for receiving parachutist badges and awards. 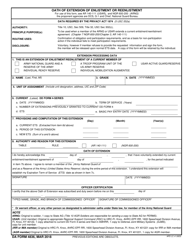 DA Form 4836 "Oath of Extension of Enlistment or Reenlistment"

This form is used by members of the Army National Guard (ARNG) or the U.S. Army Reserve (USAR) that in order to extend their current enlistment or reenlistment agreement.

This is an Army form used for detailing supplies that are to be turned in or are being issued to a certain party. 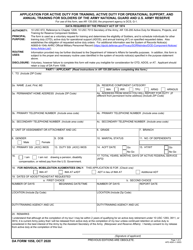 This form is used for determining eligibility and schedule individuals for active duty either for special work or for training on requested dates. 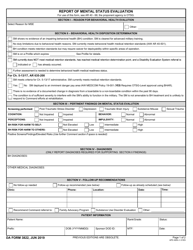 Use this form to record the results of a service member's behavioral health assessment. This document is employed in the Army as a mental status evaluation form, as it incorporates key elements needed for proper diagnosis of the service member's mental health. 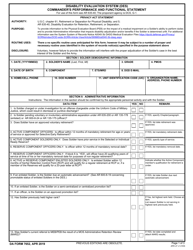 Fill out this form to record information on the impact of a medical impairment on the ability of a service member to perform their duties in the U.S. Army.

This form is used for keeping a record of a service member's shooting skills in order to ensure that all members of the U.S. Armed Forces are properly trained in firing guns.

Use this form to record firing scores during Known Distance (KD) range courses - one of the two Army-authorized alternate record fire courses. 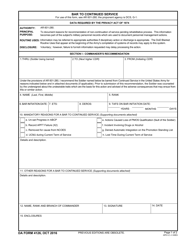 This Army form is used to place a service member on notice that their continued service may not be in the Army's best interest. 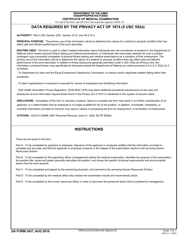 This Army form is used to record the results of a pre-employment physical examination of federal (NAF) employees. The certificate can also be used during periodic job-related physical tests. 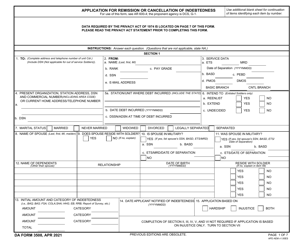 DA Form 3508 "Application for Remission or Cancellation of Indebtedness"

This is the form used by service members in order to apply for reduction or cancellation of their debts to the U.S. Government if the debts were incurred due to injustice or if suffering extreme hardship as a result of indebtedness.

This form is used by commanders and career counselors to record the results of retention counseling as part of the Army Retention Program. 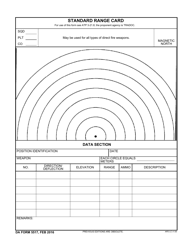 The purpose of the document is to help in planning and controlling fires, and help squad gunners and their crew reach their targets when visibility is limited. 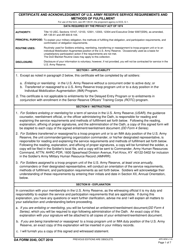 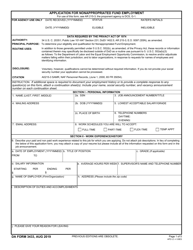 This form is used by military personnel applying for federal employment (NAF). It serves the same purpose as a resume, i.e. to evaluate if the skills and experience of an applicant fit a certain position. 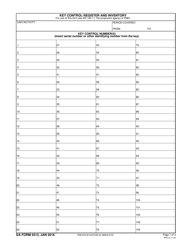 This document is required for keeping a record of Key Control Numbers in a particular Army unit. The numbers could be any kind of identifying or serial number assigned to a certain item.