The DA 67-10 Forms is a set of five forms released by the U.S. Department of the Army (DA) and used during the Officer Evaluation Process. This series includes five forms introduced in April 2014 and was meant to optimize the methods of data collection compared to the DA Form 67-9 Series previously used.

Fillable versions of the DA 67-10 Forms are available for download below. The series contains the following reports:

The reports are often confused with DD Form 67, Form Processing Action Request. This form is part of the paperwork used to request a cancellation or revision to an existing Department of Defense (DoD) form or to add a new form to the DoD inventory.

Four of the DA 67-10 Forms are reports - or grade plates - and one is a supporting form. The four reports contain an assessment of the officers' performance and personal characteristics, with the key difference being the rank of the officer being rated. The fifth form is DA Form 67-10-1A, which is a universal medium for any officer evaluation.

Unlike the DA Form 67-9 Series, the newer reports are based on the rank of the officer, since different ranks require a different level of competence. The supporting form is used for the rated officers' self-assessment and serves as a medium in preparing the report. All forms are forwarded to the Department of Army Headquarters (HQDA) after completion and serve as means of providing valuable and useful information about the officer being rated. These reports are also intended to provide information about an officer’s potential for promotion.

At the beginning of the rating period, the rated soldier will receive a copy of DA Form 67-10-1A filled out by the rater and senior rater. The officer must verify having seen the completed form and provide personal identifying data within the form. The DA 67-10-1A will later be handed to the raters at a face-to-face meeting.

The rating chain preparing the report consists of a rater and a senior rater; sometimes an intermediate rater can also take part in the evaluation process. The rating period lasts for at least 90 days and includes face-to-face discussions and supervision. The Army-wide standard is to file the report digitally through the Evaluation Entry System (EES) and secure them by an electronic signature. 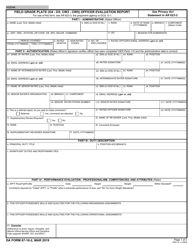 Use this form to provide the Department of Army Headquarters (HQDA) with information about the rated officer's competence, mental and physical condition and potential for promotion. 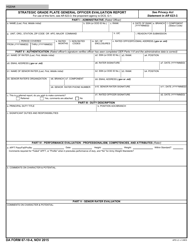 This version of the evaluation report is used for evaluating brigadier generals (BG) and higher-ranking officers. 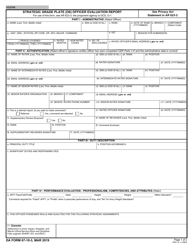 This version of the Officer Evaluation Report (OER) is used for evaluating the performance of colonels. 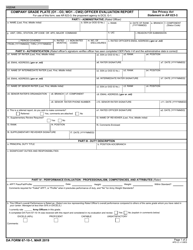 This document is used for providing the Department of Army Headquarters (HQDA) with information about officers' competence and potential for promotion. 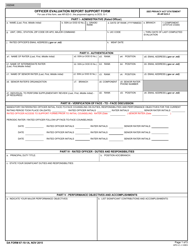 This document is used during the process of officer evaluation and assists the rating chain on the performance and potential assessments of a rated officer.