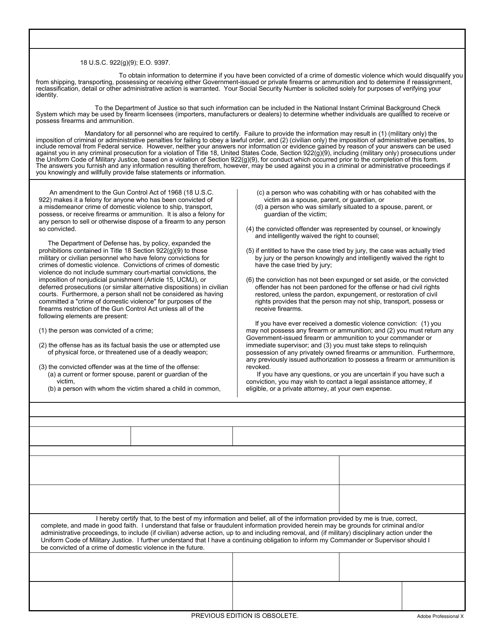 DD Form 2760, Qualification to Possess Firearms or Ammunition, is a form issued by the Department of Defense (DoD) for purposes of collecting information necessary to determine if a service member had been convicted of domestic violence or other crime that would disqualify them from possessing, transporting, shipping, or receiving both Government-issued and private firearms and ammunition. The DD 2760 is also used to determine if a reassignment, reclassification, or other administrative action is warranted towards the service member filing the form.

The form - sometimes incorrectly referred to as the DA Form 2760 - was last revised on December 1, 2002. A fillable up-to-date DD Form 2760 is available for download and digital filing below or can be found on the Executive Services Directorate website.

The DD 2760 is sometimes called the "Lautenberg Act DD Form 2760." The form received the name due to being connected to the Domestic Violence Amendment (or the "Lautenberg Amendment") to the Gun Control Act of 1968. According to this law, no one convicted of a misdemeanor of domestic violence is allowed to receive, possess, ship, or transport any ammunition or firearms. The Act also determines the selling or disposition of firearms and ammunition to anyone known or reasonably believed to have been convicted of domestic violence to be a felony.

The DD 2760 Form filing process is simple with all lines of the form being mostly self-explanatory. The form includes two sections in total:

The DD Form 2760 should be verified with your signature and submitted to a commander or immediate supervisor within ten days after receiving the form. 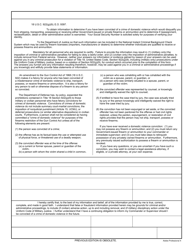