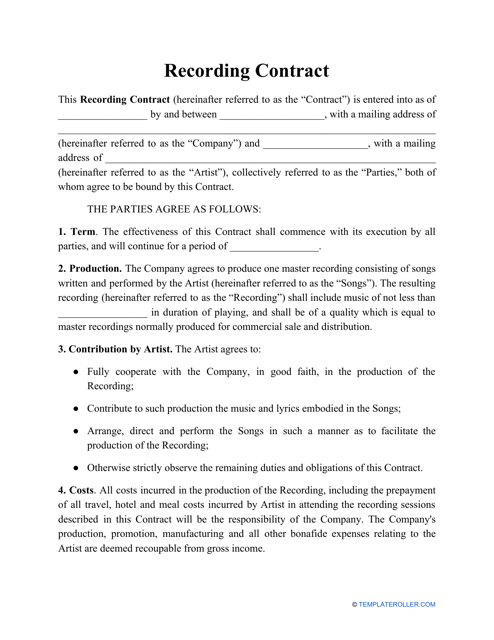 What Is a Recording Contract?

A Recording Contract is an agreement between the record label and the artist regarding the production and release of the artist's music. It binds both parties to create and sell music in a manner defined in writing. With the help of this agreement, the record label asserts its ownership of the product of the recording sessions and their licensing rights for the promotion of the album. The agreement details the payment of a fixed percentage of royalties to artists and their producers.

If you are looking for a Recording Contract template, you may download one below or create a more personalized document with the help of our online form builder.

How Does a Recording Contract Work?

A properly written Recording Contract establishes the terms of the recording and distribution process. Both parties get contractual assurances regarding the performance and conduct of the artists (singers, songwriters, band members) at the time of recording and releasing the album. The artist will also obtain autonomy in specific aspects of the creative process, while the record company holds onto the music copyright and builds its reputation in the music business.

The Recording Contract terms and conditions should include the following:

What Does an "All-In" Recording Contract Mean?

An "all-in" clause in the recording business means that in addition to the artist's royalty, the label will pay a royalty to the producer hired by the artist. Traditionally, royalties are paid on the basis of a royalty rate multiplied by the manufacturer's suggested retail price. The record royalty of the artist is around 15% and 16% of the sales price of the audio product. When it comes to the producer's royalty, usually it is between 3% and 5% of the suggested retail price.

How Long Is a Music Recording Contract?

A standard Recording Contract is signed for one year. This allows the artist to record and release the first album. After that, the record label may renew the agreement if they like the work of the artist and want a second album to be produced. If you limit the duration of your contract to one year, you keep your options open. It is not safe for artists to sign five- and ten-year contracts - it may destroy their financial futures and creative lives. The record label should not lock the artist into a lengthy contract without an escape. Moreover, a one-year contract would be the best option for the label - this time is enough to learn more about the artist and see if further collaboration is a good idea.

Looking for something else? Check out these related files: 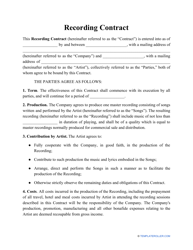 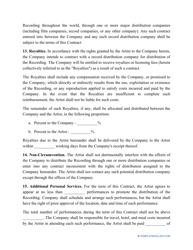 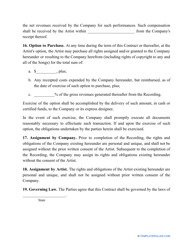 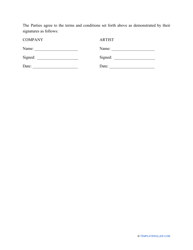